IN SEARCH OF A NEW CENTRALITY

The premises instigated in the contest for the Theater and Media Center Berazategui have a clear objective: to add a valuable new urbanity factor to the growing network of public spaces in the city, that will generate venues and enable new habits enjoyment and local consumption.

Simultaneously, the project should take another intrinsic challenge: to articulate the past, present and future of a city with a strong industrial identity and propose a new urban landscape that extends the benefits of centrality, historically located in East Berazategui, in order to bring balance to the city. The urban plan speculates with the renewal and densification of the built environment, a low-density suburban landscape, according to the development of high-scale public projects.

History and contemporaneity are seen as provocative topics of Architecture and Urbanism in the development of new social life scenarios that support the concepts of the project.

As a starting point, the project embraces the challenge proposed by the competition brief and adopts the strategy of integrating itself as a piece in the set of recent interventions (the new City Hall and the Civic Plaza Julia Copello Tiscornia) that conform a new system of concatenated public spaces. This design decision favors the creation of a new center of centrality in West Berazategui Avenue Rigolleau, used as structuring axis of the system and the city.

A central plaza arises as an articulating strategy between the city and the architectural scale of the project. The Cultural Plaza acts as part of the proposed system of public spaces, but the fact of being inserted into the heart of the project, and not only as a transitional space in front of it, gives to the plaza a greater role in daily use of the complex. The square gains a different meaning, acting as an inductive pole that comes to life and is able to transmit it to the public. The decision to consolidate the urban facade carries the intention of creating a new world, away from the noise of the avenue, an atrium to the complex as well as a space for multi-cultural outdoor activities.

The parking entrance together with the pedestrian entrance of actors and crew is located on the East side of the building, thus favoring the massive influx of public from the West, contemplating the connection with the projects mentioned earlier, a situation that is exacerbated by the use of the municipal parking counter-turn. This decision benefits the pedestrian public access, free and uninterrupted.

The entire program is arranged around the Plaza, leaning on the dividing West wall the public hall and the foyer for the main theater. The East end of the square is framed by the Bar (with expansion over it) and the administration, both programs with public entrance, and service from the parking. Also lies on the same end the technical support, with direct access from the dock. Actors and Personnel are located upstairs, with ingress from public road.

The main theater, located at the bottom of the plot, programmatically and spatially links the public world and the actors' world. On the front, the complementary rooms (microcinema and rehearsal chamber) perform similar linking operation.

Programmatic flexibility is considered a fundamental property for the correct operation of mixed-use programs in a contemporary world in which social demands mutate continuously. This condition allows using the complex in different ways and times, thus preventing to open the whole building unnecessarily and optimizing energy efficiency to reduce the cost of maintaining the building.

The project takes advantage of the longitudinal Hall to open it gradually using a control system that acts as locks valves. The exhibition space required by the program is entwined as another flexible function of the Hall.

The Cultural Plaza is by definition a multifunctional space, so the furniture was fused to the floor, solved as a series of stepped platforms that can be used as benches. Therefore, they do not interfere with the space's flexibility. In turn, the narrowing of the access to the Plaza, between the box office and the bar, allows easy control in case the space needs to be closed for a certain activity or security reasons.

A 'U' shape circulation in the ground floor allows communicating the Hall with the service area, without crossing the Plaza. In the top floor, a ring of continuous circulation connects the different functions and enables diverse functions to operate correctly.

The entrance of the actors to an interstitial space between the dressing room and the rehearsal chamber permits them to go directly to daily rehearsal, opening only a small portion of the building.

Located in the posterior portion of the plot, the main auditorium accommodates the programmatic demand, reaching the capacity of 748 seats (518 in the low stalls and 230 in the high stalls). In turn, the low stalls were divided into 2 sectors (bottom -208 seats and up 310 seats) separated by a central corridor provider with 16 spaces for people with disabilities. This partition gives a greater flexibility of use, being possible to open only the lower sector. In this way the auditorium can hold 208, 518 or 748 spectators.

As finishing surfaces, wood is mostly used due to its ability to combine the generation of warm spaces for the public with appropriate answers to the technical requirements for correct acoustics of the room. Additionally, absorbent carpet floors in warm colors are used for high traffic. As for the geometry of walls and ceilings, these were calculated using acoustic graphical systems, thereby optimizing reverberation time and distributing the sound evenly throughout the room. The slopes of both audiences were also obtained by calculation graphic system, ensuring the correct viewing from any seat. Finally, a technical space two meters under the scenario provides greater scene settings as well as a resonance chamber.

The faceted panels on the low stalls try to establish, together with the background panels, a dialogue between the public sector and the stage, which usually are visually separated by the strong presence of the proscenium arch. The merger between the ceilings and curved bands forming the top of the auditorium, serve the same purpose to dematerialize the proscenium arch and erase the boundaries between stage and audience.

As for safety, the room has a double escape in both audiences, as well as a direct escape to the square through the central corridor.

The complex was designed as a true cultural center that houses the possibility of running till 3 public shows simultaneously. Apart from the options mentioned above in the main auditorium and the cultural plaza, the rehearsal room can be open towards Avenida Rigolleau, to be uses as elevated stage in cases of public entertainment.

Consequently, the project interpolates between the introverted condition given by the location of the Plaza as enclosed space in the heart of the project, and the ability to appear as a social complex open to the citizens and able to extend the richness and festivity of cultural performances not only to a select audience, but to the entire community. These features confer to the complex the status of 'flagship building' within the city.

Technological decisions were taken based on maintaining the spatial continuity and functional flexibility of the project. As a result, the structural strategy combines two types of metal structure (a material chosen for its slenderness, efficiency and fast assembly) working independently to absorb expansions of such building size. The first type is a system of horizontal and vertical trusses that form a rigid box to save the big spans on the facade and allow a 'clean ' access to the square. It also pursues to avoid the excessive use of columns on the parking lot. The second type is a system of cross-braced frames and side plates to stiffen the structure in the transverse direction. Both systems are supported by a mix of reinforced concrete walls and steel columns.

Relative to the skin of the project, the tessellated geometry ensures its operation with flat pieces, thereby avoiding the complexity of construction of complex curved surfaces. The façade is conformed by composite panels with polyurethane core and weathering steel plates. This skin gives the project an external image that sharply contrasts with what happens inside the main theatre, both for its triangulated geometry opposite to curved surfaces, such as the industrial connotation of rusty metal, against the warmth of timber. The perforations were parametrically controlled, responding proportionally to the required levels of lighting and ventilation of the different programs, producing smooth transitions between them.

The complementary rooms conformed by the microcinema and rehearsal chamber act as an autonomous body with a different scale than the main hall theatre, which can be supplied independently from the street (through the actors' entrance). Both the microcinema and the rehearsal room can be configured as a mini-educational complex with 4 classrooms in different scales. This concept adds to the initiatives of the Ministry of Culture and Education of the city, to promote Arts and Crafts Education through community workshops.

The Theater and Media Center of Berazategui is conceived as a new piece in the construction of the urban history of the city, with an industrial look that reminisces about the roots of the city, but that also project a strong institutional and contemporary image.

The low heights of the surrounding buildings contrast to the height needed for the operation of the main auditorium. This condition raises design concerns regarding the architectural treatment, visible from multiple angles. The faceted geometry of the project and its subtle retreat into the plot reduces the visual weight in order to conceive a building that friendly interacts with its immediate neighbors.

The philosophy of the project contributes to the plan of the city towards broad tree-lined sidewalks, plazas, promenades and parks where people can enjoy the urban spectacle with a strong urban-landscaping image that catapults the development of Berazategui as an avant-garde city. 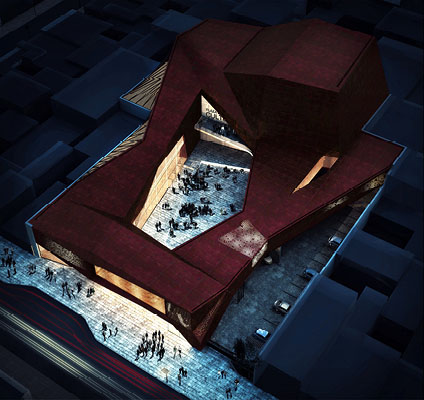 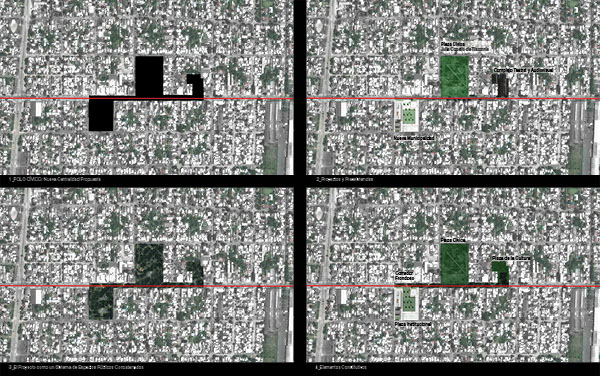 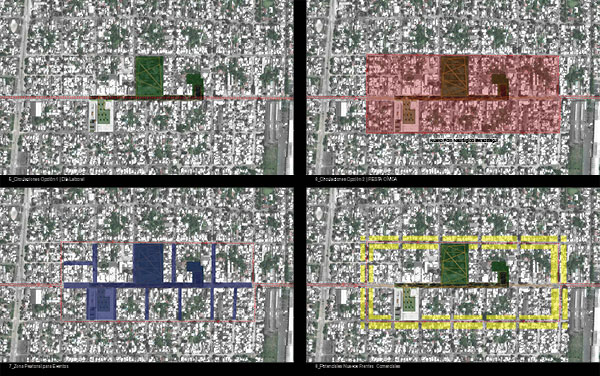 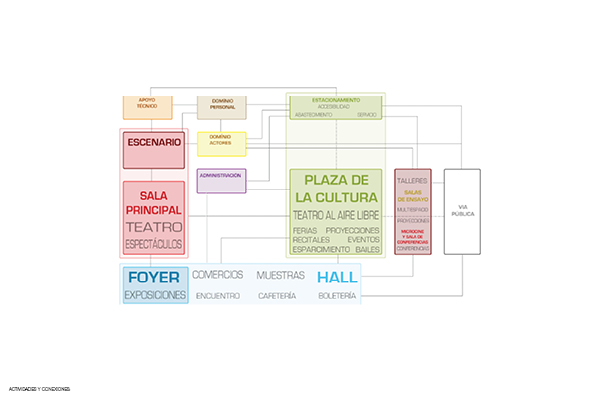 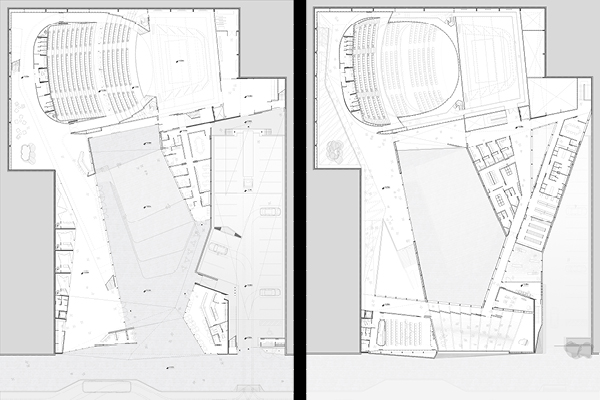 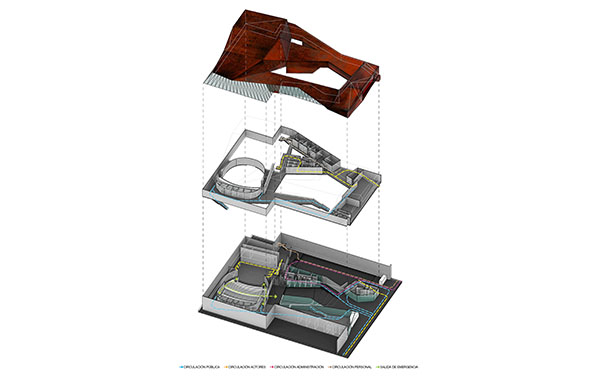 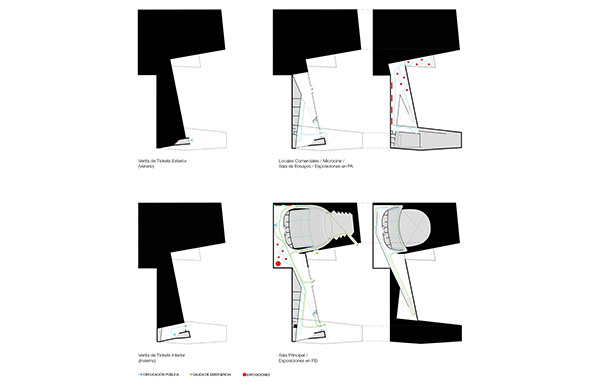 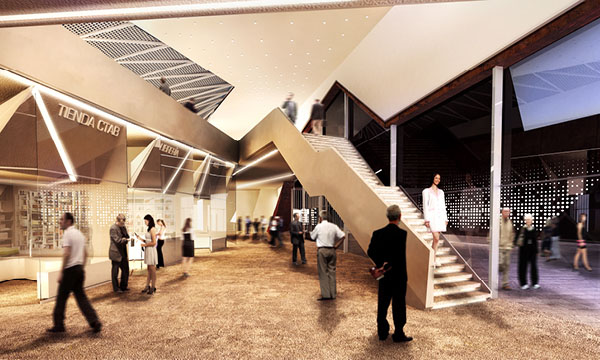 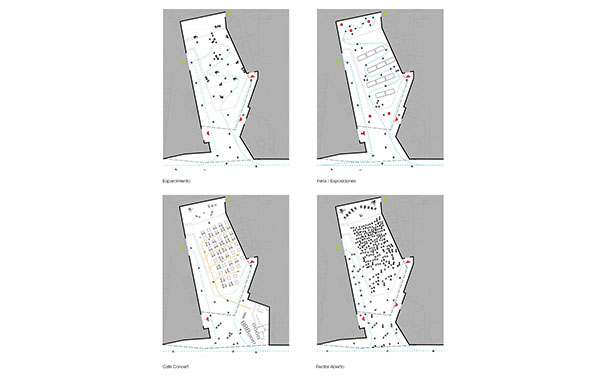 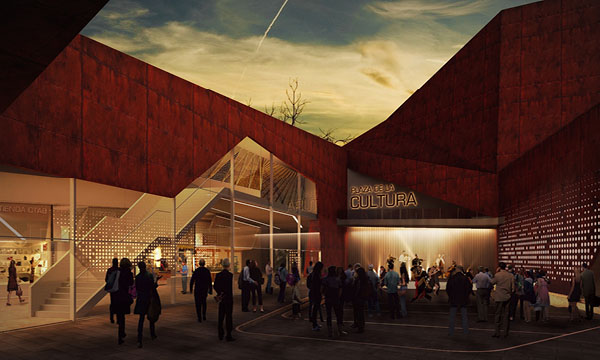 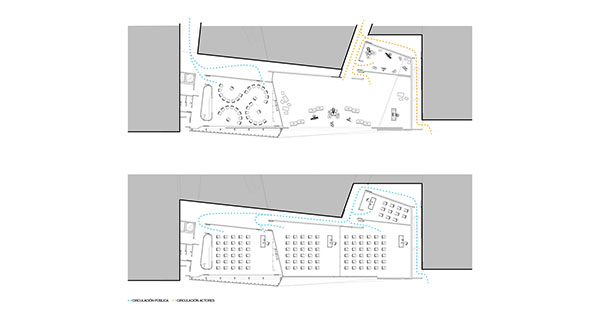 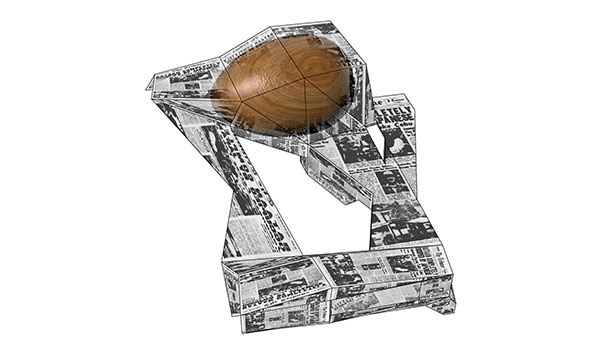 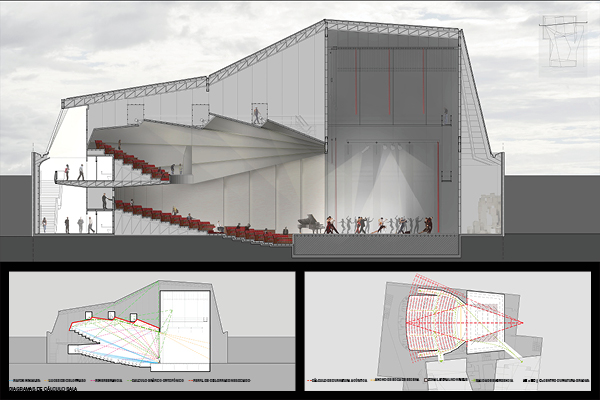 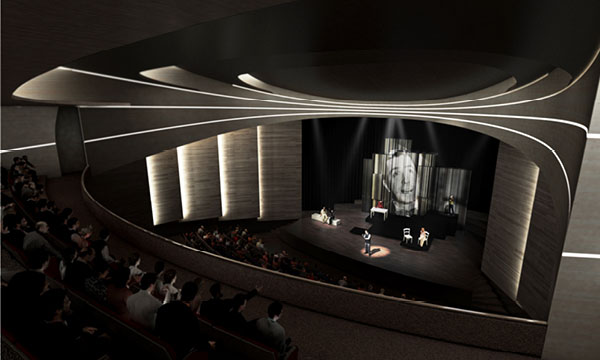 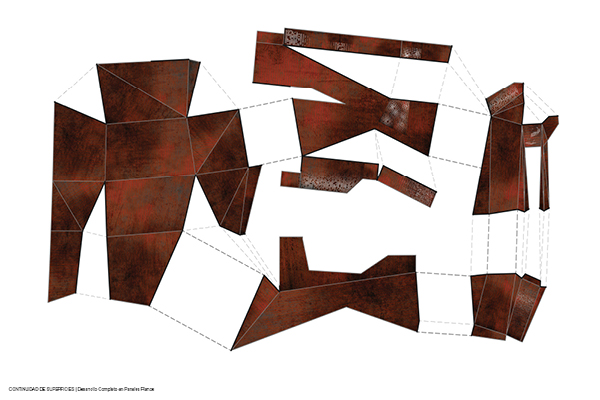 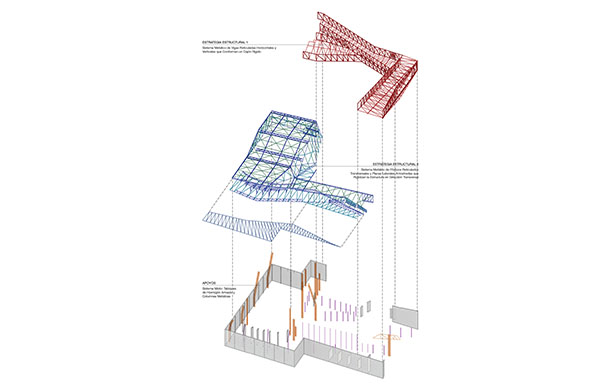 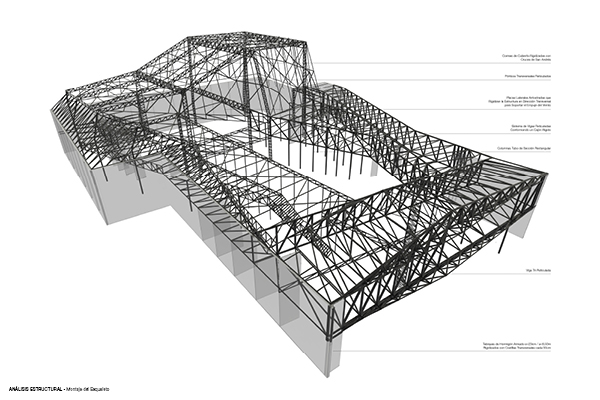 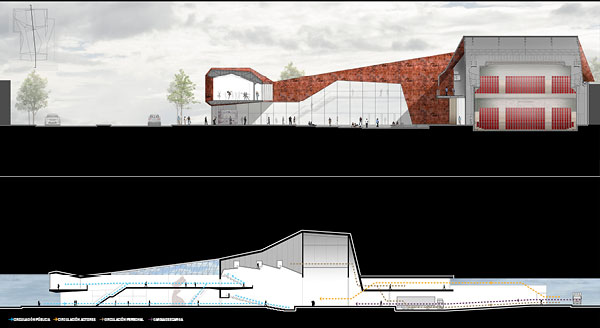 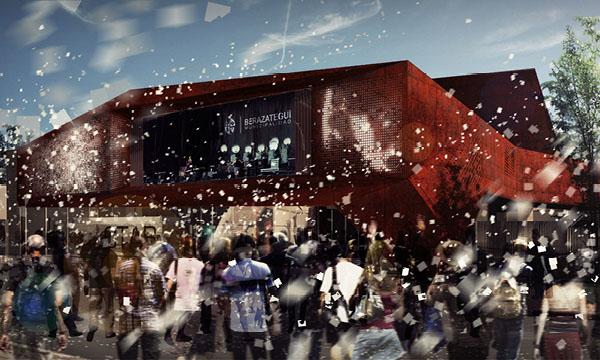